Readers have been asking when someone will release a USB 3.0 RAID enclosure. Raidon has a new product, the SafeTANK GR3660-B3 SSD/HDD RAID. With the limited bandwidth of USB 3.0 compared to Thunderbolt 2.0, a dual bay version makes perfect sense. We tested it with both SSDs and HDDs. 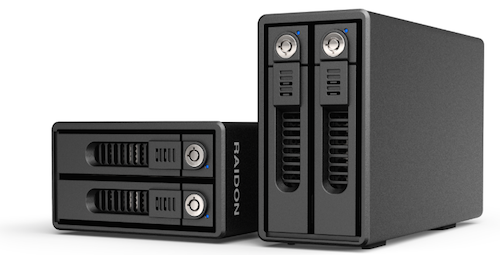 SMALL RANDOM TRANSFER TEST
We used a range of 4K to 1024K blocks in the Standard Random test of QuickBenchas a predictor boot volume 'house keeping' performance and a simulation of an application that does multiple small random transfers.

INSIGHTS
The SafeTANK GR3660-B3 was easy to set up with its "RAID-in-the-box" approach. You can select either RAID 0, RAID 1, or JBOD using a switch in the back. Then power up the drive pair and format the volume with Disk Utility.

The SafeTANK comes with mounting holes for both 2.5" and 3.5" form factor drives, so you don't need special trays to use 2.5" HDDs or SSDs. You know by now that BareFeats digs SSDs. Though we didn't expect the Samsung 840 EVO 1TB SSDs to achieve their 1000MB/s potential as a striped pair, in RAID 1 mode, they transfer large sequential data sets at twice the speed of either model of 7200rpm HDD. And they blow away HDDs transferring small random data sets in both RAID 0 and RAID 1 mode. 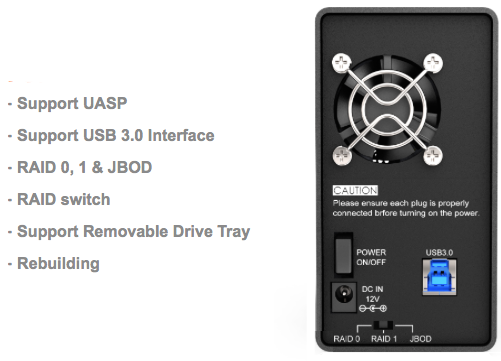 Feedback or comments? Feel free to email me, Rob-ART, Mad Scientist.
Also, you can follow me on Twitter @barefeats

Live outside the USA? No problem. We are also an affiliate of these Apple Stores:

© 2018 RAIDON Technology, Inc. All rights reserved. All trademarks are property of their respective owners.